The ASEAN-Japan Centre organized a technical visit for the representatives from the ASEAN embassies and related agencies in Tokyo to Chichibu City in Saitama, as one of AJC’s inbound tourism promotion activities. The programme was co-organized with Chichibu Omotenasih Tourism Organization with support from Kanto District Transport Bureau. The programme included a visit to the Chichibu Festival Hall, Urayama Dam, and Seibu Railway station.

At the Chichibu Festival Hall, the participants saw festival floats, and virtually experienced the atmosphere of the festival, which was replicated by the projection mapping.

The participants then visited Urayama Dam, and were briefed about how the Urayama dam has been contributing to Tokyo Metropolitan area through flood control, stable water supply and hydropower generation. The participants expressed their interest in its use of facility as a tourist site, learning that parts of facilities are open to public.

The visit was followed by presentations by Seibu Railway and Chichibu Omotenashi Tourism Organization. Seibu Railway introduced the newly renewed express train “Laview” which connects Chichibu and Ikebukuro (Tokyo). The programme ended with a network gathering with local tourism stakeholders. 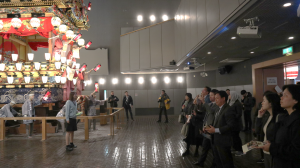 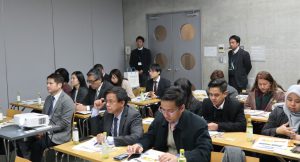