The ASEAN-Japan Centre participated in the ASEAN Tourism Forum (ATF) in Chang Mai, Thailand.  The ATF is an annual tourism meeting/event which has been organized in ASEAN Member States in January.  During the one-week period, tourism meetings including tourism ministers’ meeting and seminars are held as well as a travel exhibition at another venue.

The Centre attended the 47th Meeting of ASEAN National Tourism Organizations and the 21st Meeting of ASEAN Tourism Ministers on January 23 and 25 respectively, to share with representatives of National Tourism Organizations and various tourism organization, its activities in Japan with focus on Visit ASAN@50 promotion events.  The Centre’s participation was part of its effort to strengthen networks with ASEAN NTOs and other tourism organizations as well as to increase its visibility among the partners.

During the Closing Ceremony of ATF on January 26, the ASEAN-Japan Centre received a plaque of appreciation from the ASEAN Secretariat for its contribution to promote Visit ASEAN@50 in Japan. 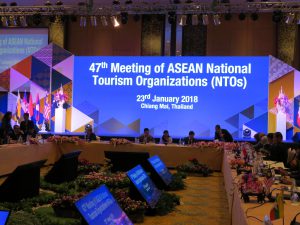 Mr. Fujita, AJC Secretary General (third from the left) at the Ceremony

■Ambassadors of ASEAN Member States in Tokyo made congratulatory addresses on the 50th Anniversary and the Visit ASEAN @50 campaign.

Special Messages from the Ambassadors of the ASEAN Member States 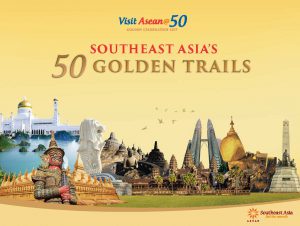