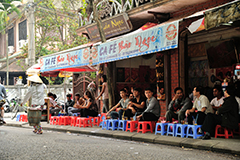 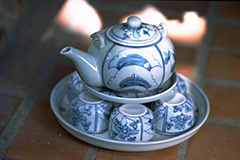 Red represents the blood that was shed during the revolution and the summit of the 5 peaks of the yellow star represents the unity of workers, farmers, intellectuals, youths and soldiers.

Attaining economic growth through introduction of market economy and liberalization

Viet Nam is a multi-ethnic country comprising about 55 minority groups. The country was unified in 1976, after the end of the Viet Nam War in the previous year. In 1986, the government has adopted the market economy system and is moving forward with its “Doi Moi” policy, which is a renovation policy aiming to liberalize trade and investment with foreign countries. With a high growth rate brought by this policy, the country has been achieving an exceptional economic growth. The country also has a face as a tourism-oriented state embracing various tourism resources including Hue, the ancient capital; Hoi An, a historic transit city of the Maritime silk road; and Ha Long Bay, the World Heritage Site with spectacular seascape of limestone pillars.

Viet Nam has a long history of exchange with Japan; one example is a Japan-town that existed in 16th Century Hoi An. Exchanges between the two countries have been active in politics, economy and culture, among others. The local flavors created by the slender landscape stretching north-south, and the unique blend of cultures tinged with the past Chinese and French rule, have made the country a popular tourism destination for the Japanese.

Embassy of the Socialist Republic of Viet Nam in Japan