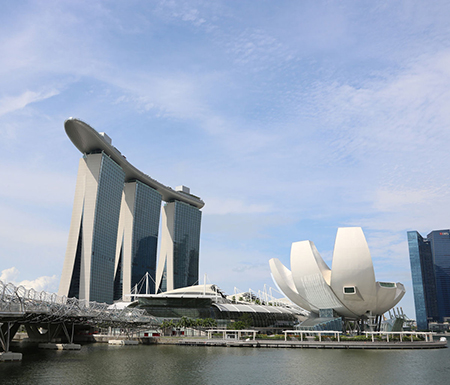 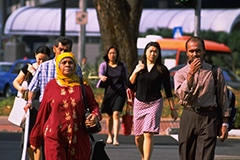 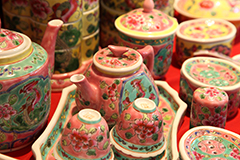 Red represents universal brotherhood and equality of man, white depicts virtue and purity and the 5 stars are democracy, peace, progress, justice, and equality. The crescent illustrates a young nation on the ascendant.

Verdant Garden City that leads the economy of the ASEAN region

Known as the “Garden City” for its beautiful landscape with rich nature, Singapore is a city-state facing the Johor Strait at the south end of the Malay Peninsula where the Easter and Western worlds get crossed. Derived from cultural aspects from China, Malaysia, India, Europe and other parts of the world, Singapore’s culture is a harmonious blend of diversified Oriental and Occidental cultures, languages and religions. Although it has relatively small land area which is almost equivalent to Tokyo 23 Special Wards, the country had accomplished miraculous growth through development of its electronics industry. Also, the country has focused on high-value added manufacturing industry, finance, information and communications and biotechnology industries, and served as a driving force for the world as well as ASEAN’s economy with the cutting edge businesses. Today, the country is the center of finance and trade with its strategic location in the Asia Pacific region and the outstanding infrastructure. It is the hub of the global business by attracting foreign multinational companies through, for example, its various tax breaks.

The Japan-Singapore Economic Agreement for a New Age Partnership concluded in 2002 is the first economic partnership agreement that Japan has ever entered into. The Agreement seeks a comprehensive bilateral economic partnership in such critical areas as liberalization and facilitation of trade and investment, finance, IT, science and technology, and human resource development.

Embassy of the Republic of the Singapore in Japan