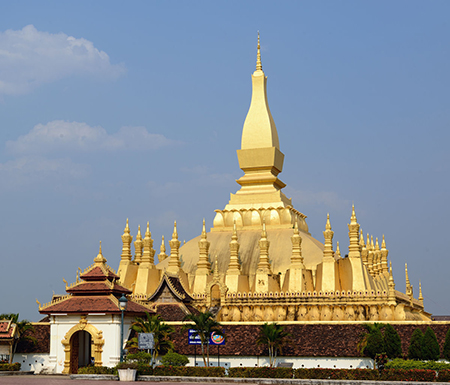 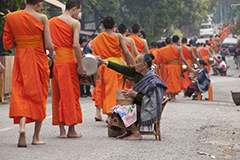 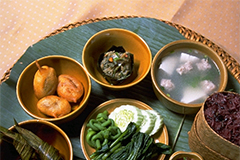 Red represents the blood that was shed for freedom and independence, white circle represents the prospects for peace and a bright future while blue signifies the country’s prosperity and the Mekong River.

Endeavoring for further economic growth with the economic reforms

Surrounded by five countries namely Vietnam, Cambodia, Thailand, Myanmar and China, Lao PDR is the only landlocked nation in ASEAN and is comprised of some 50 ethnic groups. The 70% of the population comprised primarily of devout Buddhists. The country embraces rich natural environment, characterized by its abundant water resources derived from the Mekong River that flows from north to south of the country. The country began economic reforms in 1986 designated as the “New Economic Mechanism” through which it has pursued a policy of economic liberalization and a market-oriented economy. The mainstay industry is agriculture, and coffee is an important export agricultural product. Meanwhile, studded with attractive World Heritage designated sites such as Luang Prabang and Vat Phou, the country is also active in developing its tourism industry.

Along with various other forms of economic support, Japan is extending grant aid for the preservation of the World Cultural Heritage including the Vat Phou archaeological site as a part of its ODA projects.

Embassy of the Lao People’s Democratic Republic in Japan