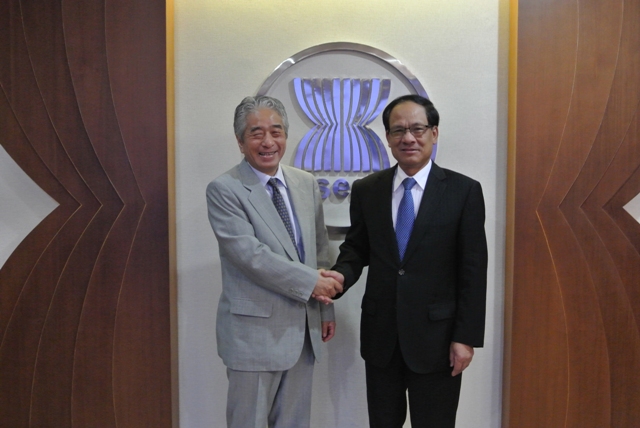 Mr. Masataka Fujita, Secretary General of the AJC, paid a courtesy call on H.E. Le Luong Minh, Secretary-General of ASEAN, on June 21, 2016. It was SG Fijita’s first official visit to the ASEAN Secretariat in Jakarta since he assumed his post in September 2015.

At the courtesy call, SG Fujita explained the details of the reform that the Centre is undertaking for its activities. He mentioned that the Centre will focus more on regional and policy oriented activities combined with Centre’s traditional capacity building projects, producing result-based and measurable outcomes. He also said that the Centre’s reform includes taking multi-disciplinary as well as cross-cutting approaches. He shared his view with H.E. Le Luong Minh that by implementing this reform, the Centre aims to be more useful for the ASEAN as well as its member states, and wished that the Centre could further enhance the involvement with the ASEAN and its integration process.

H.E. Le Luong Minh welcomed SG Fujita’s visit to the ASEAN Secretariat. He reiterated that he agrees and supports the Centre’s reform of its activities. He extended his expectation towards the Centre’s role in further developing the ASEAN-Japan relations.