On March 12, 2014, seven administrators from CLMV(Cambodia, Lao P.D.R., Myanmar and Vietnam )visited the ASEAN-Japan Centre.
After a brief introduction about the mandates and activities of the Centre, Mr. Songkane Luangmuninthone, Director of Trade and Investment Division, gave a detailed presentation about the trade and investment activities between ASEAN and Japan organized by the Centre. It was followed by Mr. Dananjaya Axioma, Director of Tourism and Exchange Division, with a presentation about tourism between ASEAN and Japan.
During the Q & A session, many questions regarding the efforts of the Centre to vitalize tourist traffic between CLMV region and Japan, as well as the trends in foreign direct investment from Japan towards each CLMV countries. Also, a keen question about exchange program conducted by the Centre was raised, Mr. Axioma explained that the Centre is now working more in exchange program to strengthen the relationship between Japanese and ASEAN people, especially in facing the ASEAN Community 2015. 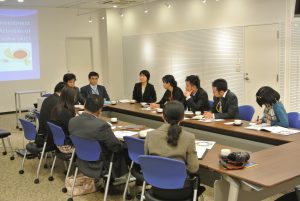